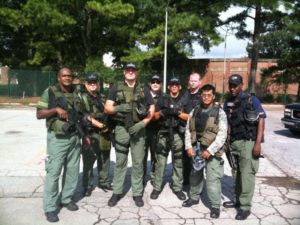 
Research did not uncover the formation date of the organization, its initial commander, strength, rank structure and divisions.  However, it was learned that before the organization became the Reserve Unit that we know today, it was formed as a Sheriff’s Posse.  This group of individuals assisted mostly in search and rescue efforts, civic and other non-law enforcement roles.

By 1991, the Fulton County Sheriff’s Office Reserve Unit was comprised of over 350 active sworn reserve deputies.  Those deputies volunteered their time to serve the citizens of Fulton County and to supplement the full-time deputies of the agency.  This Reserve Unit was the largest law enforcement reserve unit in Georgia.  Its members received the same training as the full-time regular deputies and was held to the same professional standards by the Georgia Peace Officer Standards and Training Council (P.O.S.T.).

At that time, the Reserve Unit was comprised of five main divisions to support the Sheriff’s Office and the community.  Those divisions were:  Four-Wheel Drive, Motorcycle, Horse, Foot Patrol and Correction. Deputies desiring to serve in one of the first three divisions had to personally provide their four-wheel drive vehicle, motorcycle and horse (with horse trailer).  The vehicles were outfitted with the appropriate law enforcement hardware and equipment, such as decals, lights and siren, at the owner’s expense.

S.E.R.T. was created in 1988 to provide a tactical team for the Democratic Convention and initially consisted of 13 members.  The team remained intact after the Convention and then began to work alongside members of the Atlanta Police Department’s Red Dog unit until 1992.

Besides the regular community service events, members of the Reserve Unit were called into service during several emergencies.  Some of those included the Rodney King riots, Freak-Nik riots, March on Forsyth and a few others.  These dedicated deputies also assisted with several large events in Atlanta, such as official visits by Presidents H.W. Bush and Bill Clinton, the 1996 Olympics and several other major events.

In 2017, the Reserve Unit was comprised of two groups of individuals who were desirous of supporting the Sheriff’s Office.  The first group consisted of sworn, state certified reserve deputies and the second, retirees who once served as sworn full-time deputies of the Sheriff’s Office.   In January 2021, both sections merged under a single umbrella, V.I.P.E.R. Operations.

To support its current mandate, V.I.P.E.R. Operations is divided into four main divisions, namely:  Field Operations, OPS, Retiree Operations, and Administrative Operations.  For more information, please click on the link for the page entitled “Reserve Divisions”, at the top of our website’s home page.

During its formative years, the Reserve Unit was led by Major Richard H. Davis.  Today, in its current role as V.I.P.E.R. Operations, it is led by Lt. Colonel Samuel Johnson who serves as the Commander and Major James Anderson, as the Assistant Commander.  They are aided by four Captains: Captain Bobby Stewart, Captain Gregory Stewart, Captain Elbert Carter, and Captain Adrian Stubbs.

Are you interested in taking the first step in … END_OF_DOCUMENT_TOKEN_TO_BE_REPLACED

Each year, deputies of the Fulton County … END_OF_DOCUMENT_TOKEN_TO_BE_REPLACED